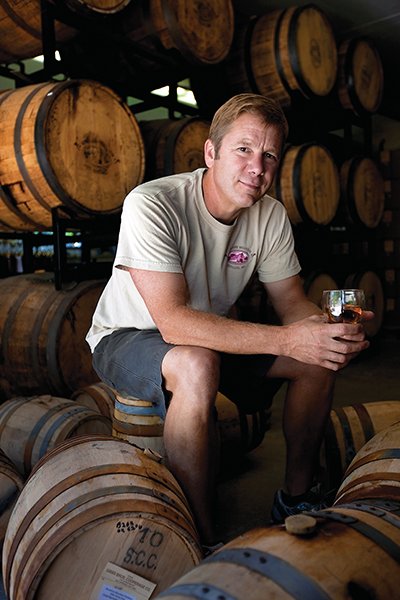 Chris grew up in Westchester County, New York and had an early interest in distilling. In the 8th grade, he tried to make his own still for a class science project, but the plan was squashed by his mother when she realized it was a federal offense. He turned his interest in putting things together by studying biochemistry as an undergraduate with a focus on medicine and the environment, going on to receive his Master’s Degree in emergency medicine. He embarked on a twenty-year career as a Physician’s Assistant in one of the busiest emergency rooms in the San Francisco bay area. Looking for a slower pace and longing to return to his East Coast roots, Chris, his wife Tyler, an architect, and their family moved to the quiet countryside of Berkshire County in Western Massachusetts.

They decided to purchase a neglected apple farm and spent three years cultivating the trees until they finally started bearing fruit again. Faced with an abundance of apples, and looking to leave the medical field, Chris took a page from his childhood and decided to start a distillery with the initial plans of making apple brandy. The farm happened to also be home to historic granite-based spring water that was once deemed the finest in the world. As the basis of any fine spirit is quality water, Chris knew he had the makings of a distillery. Applying his biochemistry background and working with experts in the art of distilling, Chris quickly became a natural at developing product formulas.

Founded in 2007, Berkshire Mountain Distillers (BMD) has grown to include a wide range of award-winning spirits: Ice Glen Vodka, Greylock Gin, Ethereal Gin, Ragged Mountain Rum, Berkshire Bourbon and New England Corn Whiskey. Chris began selling BMD’s spirits door to door in Massachusetts out of the back of his truck, and today BMD is available in 19 states. Chris remains fully involved at the distillery and has a passionate hands-on relationship with every bottle. His current role as owner and distiller is an amalgamation of his passions: farming, chemistry, and construction. He still looks forward to the challenge of developing new products and growing the BMD brand.

One of the founding members of the craft distiller movement, Berkshire Mountain Distillers is an authentic, regionally focused maker of small-batch, award-winning craft spirits. Firmly established, the craft distillery is leading the industry in both quality of production and sustainability. Our products are currently available in many states across the U.S.